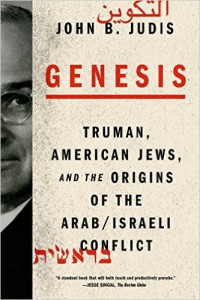 Every once in awhile a history book arrives that is remarkable in its presentation.  Genesis is one of those remarkable works, presenting a narrative that goes well beyond dates, times, decisions, and a predetermined geopolitical reference.   John Judis is able to present the personalities behind the decisions, the variety of factions within the Zionist camp, the variety of factions and interests within the U.S. political scene, and the main themes that drove these individuals towards their respective goals.

Focusing on the Truman era, Judis argues that Truman was not the great Christian Zionist he is often referenced as.  On the contrary, Truman comes across as an indecisive, sometimes uninterested participant who eventually made his decisions based on the apparent influences of Zionism and the Jewish population on the domestic vote.  The political infighting between the State Department, the Pentagon, and the range of Zionist movements is not presented in a blow by blow account, but follows different themes that are interwoven over the full timeline of this history.

A seemingly minor theme caught my attention as it highlights the colonial settler aspect of Anglo-American history in its relationship to indigenous people in the Americas and in the Middle East.  Judis writes of the early Zionists,

“Brandeis and his circle viewed the Zionist settlers as “pioneers,” “pilgrims,” and “puritans” and the Arabs as “Indians.”   The comparison was partly an apt one.  America was the original settler colony where the immigrants displaced the native inhabitants and eventually established a state of their own.  Brandeis saw it as justifying Jews displacing Arabs in Palestine.”

Later, at the closing of WW II, the same theme is revisited using the argument of “eminent domain, “used to justify the American conquest of Mexico and the movement of American Indians into modern society, applied to the situation in Palestine.”  Buxton, like Brandeis and Jabotinsky, thought of the Palestinians as the Indians or Mexicans whom the United States had, to his mind, justifiably displaced. ”

Toward the end of this narrative the theme comparison continues, “…the victors can eventually lay aside the memory of what they have done.  Few Georgians today remember or regret having driven the peaceful Cherokee Indians off their lands.

The Zionists who emigrated to Palestine treated the Arab inhabitants very much like America’s Indians, But Palestine’s Arabs are unlikely to suffer the ignominious fate of many Indian tribes….Yasir Arafat said…”One hundred and seven years after the [founding Zionist] Basel Conference, ninety years after the Sykes-Picot agreement, Israel has failed to wipe us out.  We are here, in Palestine, facing them.  We are not red Indians.”

I highlight this as it underlines the main demographic theme that weaves through all narratives and histories of Palestine-Israel.  It comes in the form of a “land without people for a people without land” (similar to the U.S. settlers seeing their land as empty), as the “demographic threat” from a resident and growing indigenous Palestinian population, it underlies all Zionist thought from its debut with Jabotinsky, Herzl, and Ahad Ha’am to be carried forward with Ben Gurion, Sharon through to Netanyahu.

It is the formation of the ideas, and formation and actions of the different groups that are central to this history.

The ideas of the Zionists, and the formation of their various political pressure groups  – centred on the U.S. as it is a history focussing on Truman but necessarily tying in the nationalist and socialist ideas rising in Central and Eastern Europe at the same time – is presented in the first part of Genesis, and carries consistently through the history.  On the Palestinian side, one of the unfortunate themes is the lack of a united Arab leadership – or after the 1936-39 revolt the lack of any leadership – and the individual self-centred manner in which other Arab leaders dealt with the problem.

A reader not having a basic outline of modern history (i.e. post 1850) as it concerns events in Britain, the U.S., Europe, and the Middle East might have difficulty following the presentation.  Obviously, the major historical events as per treaties, military actions, and political upheavals are presented within the themes.  However it is the thematic presentation and the understanding of the different personalities and how the two are woven together through the political processes that make this an interesting, generally readily accessible work.  It is history as it should be written.

Judis concludes that Truman’s indecisiveness followed by acquiescence to Israeli/Zionist demands set the stage for the rest of the 20th Century.  He concludes that “Truman preferred to suffer delusions rather than acknowledge the power that Israel and its supporters had over his decision making.”  Further, he adds, “They were wilfully ignorant.  That continues to be the case today among people who want to believe that Israel’s government can do no wrong.”

The book was published early in 2014.  In response to criticisms of the book received at that time, Judis wrote in an article in the New Republic,

“What Israel’s early history does suggest, though, is that Palestinian Arabs have a legitimate grievance against Israelis that has never been satisfactorily addressed. It won’t be addressed by abolishing Israel—that’s not going to happen—but it can be addressed by an equitable two-state solution that gives both peoples a state and that opens the way for Israel’s reconciliation with its neighbors. If there is a lesson to Genesis—and I happen to believe that history can tell us things about the present—that’s what it is.  (Conservative Critics Say My New Israel Book Is Anti-Semitic. They Must Not Have Read It Very Closely. New Republic, February 26, 2014)”

The two-state solution itself can generally be thrown into the dustbin of history. However, Genesis is an excellent historical work.  It presents a clear definition of the Zionist influence – both in its broader geopolitical terms and its domestic U.S. terms – on the thoughts and actions of the Truman government and its enduring results.

Genesis – Truman, American Jews, and the Origins of the Arab/Israeli Conflict.  John B. Judis. Farrar, Straus, and Giroux, New York. 2014.